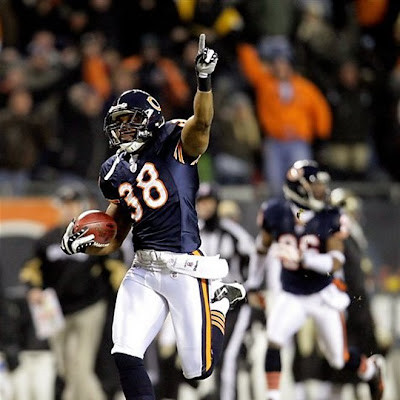 A bystander recently overheard me and a fellow Bears fan dissecting the Bears’ revolving door at safety and asked “Why are you guys obsessing about that position?” With the hairs on the back of my neck standing up and my fist clinched in fury, I rattled off…

Will 2010 bring some stability to the position that’s leaked like a sieve since Lovie became head ball coach in 2004?

I doubt it either.

Many Grabowskis, including myself, were questioning why Harris was lining up at FS in OTAs. I’m guessing it was done to give a bunch of guys different looks at both positions and see how different combinations performed in the hopes of one tandem standing out.

After flopping from free safety to nickelback and now to strong safety, Manning is the X-factor. How well (or poor) he picks up the SS spot will go a long way in determining who lines up as starters.

Maybe it’s because it took him years to recover from the botched coverage in Super Bowl XLI – when he let Reggie Wayne run wide open for a TD – or because Lovie’s over-analyzed how to maximize his God-given natural talents…but it’s disappointing #38 hasn’t made a bigger impact.

I think Manning should be our starting nickelback, but Lovie seems destined to make him a safety. With Major Wright waiting in the wings and Chris Harris manning one spot, I think Lovie will have him on a very short leash early in 2010.

The battle for what I think will be two backup spots will come down to Bullocks, Steltz and Afalava. The coaches like Steltz’s smarts, and there’s a place for his steady play on D and special teams.

Bullocks finished strong in the final two games last year, recording 7 tackles in games vs. the Vikes and Lions. With Steltz and Bullocks seeing significant playing time at the end of last year, Afalava’s role diminished to the point where I think he’ll be the odd man out this year.

I’m not going to waste your or my time analyzing the three special teams roster spots.

So there you have it – the complete 2010 Chicago Bears opening day roster.

I’ll look forward to revisiting my predictions in early September so you guys can ridicule me for all of my wayward picks.